"Starting RoseCrete was an opportunity for me to help people with stories like mine." 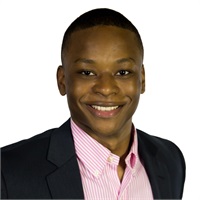 Born into poverty, the concept of wealth was foreign to Reggie and his family. However, after experiencing countless blessings, Reggie was able to rewrite his family's narrative and open doors for himself and others just like him.Reggie founded Rosecrete on the belief that there are two things that can dramatically change a person's life for the better: education and financial support. Realizing the impact that both had on his journey, he decided to use his knowledge and experience to empower others to change their lives and the lives of those around them.As a former college football player who once had dreams of making it to the NFL, he empathizes with the countless professional athletes who have lost all of their hard earned money as a result of imprudent investment decisions or unsuitable advice. Rosecrete was designed to be a part of the solution. Reggie strives to educate Rosecrete's clients so they can seek control of their financial lives for a better future. Reggie is a proud graduate of Vanderbilt University, where he was a member of the football team, and the Owen Graduate School of Management. His experience includes risk assurance over financial reporting and business process controls for multi-billion dollar corporations as an external auditor, brokerage for multi-million dollar individual accounts, financial and tax consulting for small business owners and sole proprietors, and wealth management for high-net worth individuals and families.

He was recognized as an Owen World Shaper, an honor given to those business school students who not only succeed in business, but also improve the community. He earned his Certified Public Accountant (CPA) designation and is a member of the American Institute of Certified Public Accountants (AICPA) and the Tennessee Society of Certified Public Accountants (TSCPA). He holds his FINRA Series 7 and 66 registrations with LPL Financial as well as the Tennessee Life and Accident/Health insurance licenses. Reggie is a board member of Backfield in Motion, a nonprofit he attended as a young boy, aimed at helping at-risk inner city boys recognize their full potential through academic and athletic enrichment. Additionally, he is a member of the finance committee of Communities in Schools of Tennessee. He is also a cofounder of the Brandon Key Scholarship Fund, a memorial scholarship named in honor of one of his high school friends. In 2017, Reggie was recognized as one of Nashville’s Black 40 Under 40, an award given to Nashville’s brightest millennials effecting community change in middle Tennessee.